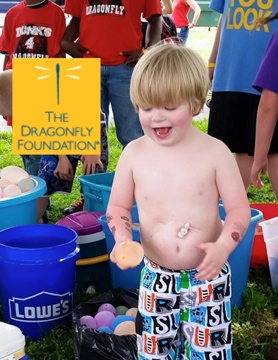 From a Dragonfly Mom:

“When my son T was diagnosed, we went from a seemingly healthy little boy to a baby in the PICU after a major surgery in a matter of 48 hours. When we were moved to the hem/onc floor, I met other families in passing, but T was so sick and experienced so many complications that we were rarely in the playroom or able to spend much time in the parent lounge making connections. It was incredibly isolating. We didn’t know anyone to ask about how to help T be comfortable with procedures. We didn’t have other people to offer hospital survival tips for us. Towards the end of chemo, KG told us about a new organization that she and her daughter were a part of, one that was helping with the need for comfort, joy, and distraction for her little fighter. She suggested we get T involved as well.

That new organization was Dragonfly. Through you, we found other parents walking this road. I gained a huge family of people who know what it feels like to watch poison being put into our babies’ bodies in hopes of giving them the ability to live a longer life. We met other kids who had scars on their bellies, shiny bald heads, and lines in their chests. T got to be a regular kid, in a whole new world where no one stared at the feeding tube on his face, and no one ever asked that dreaded question of “what’s wrong with him?” He met big kids who looked like him and kids just his size who were ready to play.

Every procedure, needle poke, surgery, scan, and admission is now marked by the beads he earns through the Beads of Courage Program. Your sponsorship of that program gives my fighter the ability to look at all of his milestones large and small in physical form. That’s huge. I have watched him sit perfectly still for IV placements and turn to me afterwards and ask if he gets a bead. It helps so very much to make the fear manageable for him, to know that each time he’s brave, there is something to reward him.

His immune system remains fragile, even long after therapy concluded, and through Dragonfly, he’s been able to see Elmo on stage and has watched Disney characters dance and sing at US Bank Arena from the safety of the Dragonfly Suite. Those are experiences he would never had been able to have without you. The joy you’ve brought to him is incredible, and I’m so glad we’ve gotten to be a part of the first five years of Dragonfly.

Thank you, for all that you have given our family. You have changed all of our lives for the better.”