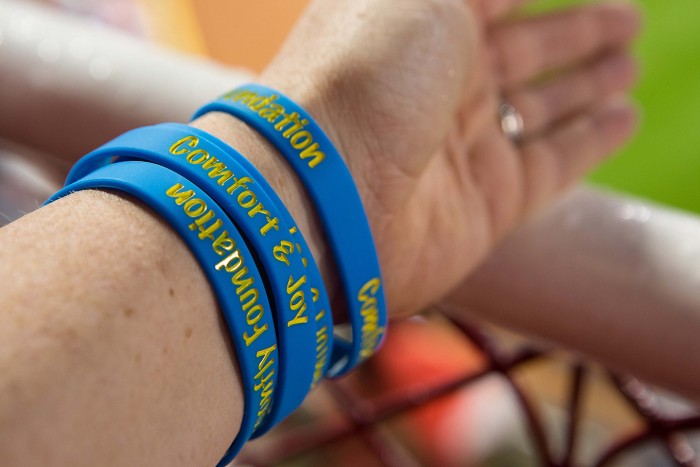 Cancer is relentless. It does not discriminate based on color, race, gender, financial status, or age. It doesn’t stop at just one attempt to steal a life.  It divides and mutates in order to deceive the body and accomplish its goal. Cancer tries to conquer a person’s body and destroy the spirit. It causes a person to lose hope and give in. That is where Dragonfly Foundation comes in.

P, 14, was diagnosed with Leukemia in July 2004. After enduring 38 months of treatment that included severe complications such as a brain blood clot and pancreatitis, he thought he had beat cancer. On April 21, 2010, we discovered the cancer was attempting to take his life again. He countered with 108 treatment weeks of very intensive chemotherapy. A mere 6 months after therapy ended, his leukemia returned on February 19, 2013. We knew a Bone Marrow Transplant would be his last chance at life. Insurance mandated that his transplant be in Cincinnati, Ohio, 100 miles from home.

P checked into the BMT unit on May 6th. Our social worker, Sharon, gave us a welcome bag full of many supplies.  The navy bag with the gold dragonfly imprinted on it symbolized so much more than just necessities; it was a source of strength and hope. Sharon explained the mission of The Dragonfly Organization was to bring comfort and joy to the children and families facing cancer at Cincinnati Children’s Hospital.

P underwent the BMT along with the worst days of his life.  He needed something to live for; going to see his favorite NFL team, Green Bay Packers, play in Cincinnati on 9/22/13 would be it. That gave him a reason to live.

The trick would be figuring out a way to get a very immune-suppressed child into a stadium full of people. Sharon said, “If anyone can do it, it would be the Dragonfly Foundation.”

As P’s spirits hit an all time low, the game was an incentive to take a bite of food or take a sip of liquid even as it burned his throat due to the mucositis.

On September 22, 2013, P’s big brown eyes beamed as he walked into the Paul Brown stadium with a smile on his face that even his mask couldn’t fully hide. He had met his goal thanks to Dragonfly and their generous donors. He watched his favorite team from a suite! The entire experience was priceless.

The human spirit is bigger than cancer. Dragonfly instills hope in children with cancer. When I think of Dragonfly, Father Flanagan’s quote comes to mind:

“A man never stands so tall as when he stoops to help a child.”