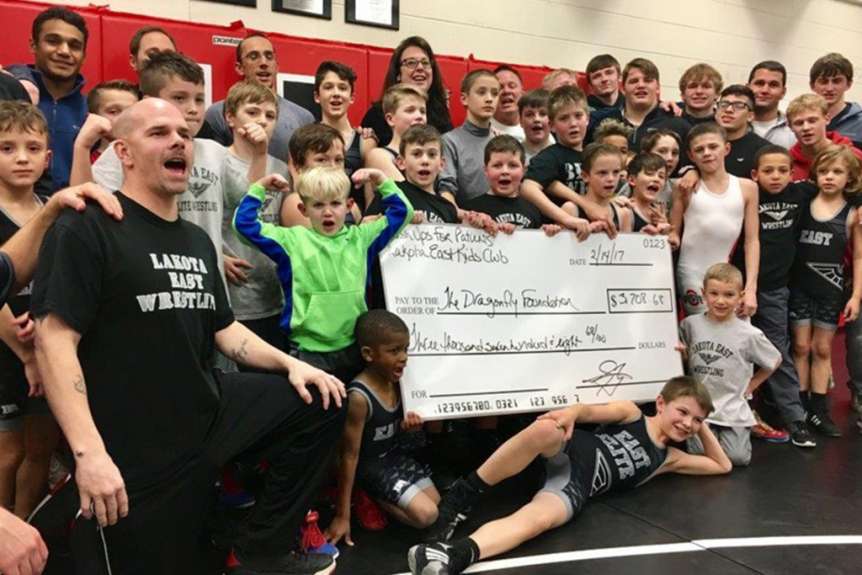 Cancer came closer to being pinned for a loss Tuesday as dozens of young wrestlers at Lakota East High School celebrated their $3,700 donation to the area Dragonfly Foundation.

And later that evening Davidson was also the grateful recipient of a $6,500 donation to the Dragonfly cancer-fighting foundation from another Lakota East student-led fund-raiser — an Orange Out event from a December basketball game at the Butler County school.

But it was the young wrestlers who sweated through hundreds of push-ups as sponsored fund-raisers for Zurlinden’s idea he dubbed “Push Ups For Patients” who were bursting with excitement over their accomplishment.

“It was amazing,” said the smiling Zurlinden over the noise of Lakota East’s crowded wrestling training room.

“It was two minutes of push ups by all these kids – before a huge crowd – at our annual wrestling tournament in December,” he said. Donors sponsored each kid for various amounts of money.

“My son was one of the very first dragonflys and that’s why I did it,” he said of the Symmes Township-based non-profit that helps meet the patient care needs of Cincinnati Children’s Hospital Cancer and Blood Diseases Institute patients and families from birth to age 30.

“This isn’t going to be just a one year thing it’s going to be something we continue to do,” Zurlinden told Davidson.

Davidson told the youths “you really helped us out and you are helping us meet our families’ needs. I love it when kids help our kids.”

“The deep personal connection to students in our school and district who are enduring cancer and bone marrow transplants, while being supported by the Dragonfly Foundation, drives home the commitment our students have made,”said Davis.

Lakota Schools Spokeswoman Lauren Boettcher said “seeing our students not only recognize the misfortunes of others, but take it to the next step of doing something about it, is something that really speaks to the values they’re learning in the classroom and at home.”

“I know that many Lakota students and schools have formed a connection with the Dragonfly Foundation and it’s great to see their efforts actually feeding right back into the community that does so much to support our schools,” said Boettcher.