When my husband and I (Ria) arrived at Western Bowl for tonight’s fundraiser, we thought we got the date wrong! There were supposed to LOTS of people attending the event, but there were only a few cars in the parking lot. As I rechecked my smart phone (never without it!), my husband saw that one of cars had a Dragonfly bumper sticker on it, so we went inside.

it was simply overwhelming to see so many supporting our Dragonflies — several of whom attended the event and had a fantastic time!! We want to thank the Thetas (and their primary sponsor CBTS) for all that they did to make the event such an incredible success!!

FYI Prior to this event, the largest fundraiser ever held for Dragonfly was attended by 300 people! The Theta’s event blew that number out of the water! 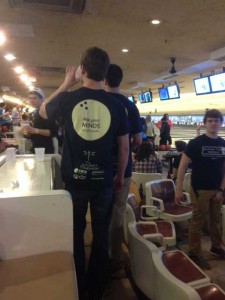