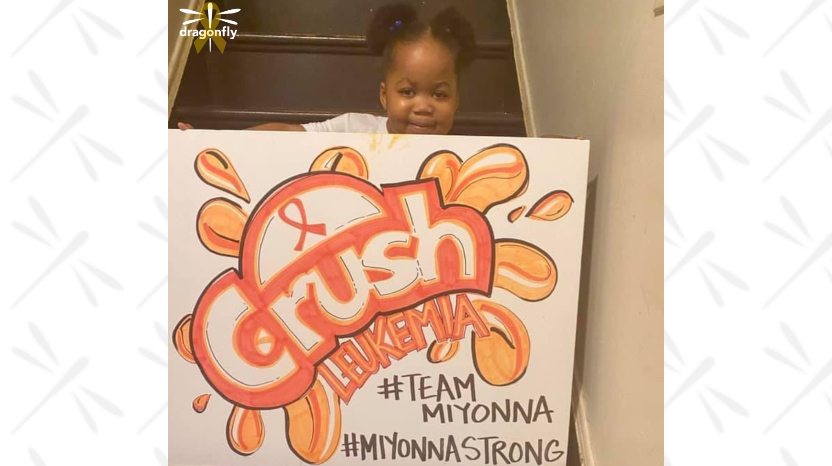 Miyonna’s journey started in August of 2020, she was only 3 years old and a very active little girl. She loved to play with her siblings, dance, and have fun. One day she came to me and told that her arm was sleepy (numb) so I was thinking that she fell or landed on it wrong or nursemaid elbow. So I waited a few hours to see if it got better and it didn’t. So I took her over to children’s hospital and they did a x-ray of her arm and they didn’t see anything but a little swelling. So they wrapped her arm and and put her in a sling and told us to return in a week. So returned home and she went back to her normal activities, so when it was time to return back that following week we went back and they gave her the clear and everything was okay.

A week passed and this time it was her right arm and she came to me again and said that her arm is sleepy. So I was thinking it was the same thing from the week before so I just let it go for a few days and I started giving her Tylenol and Advil off and on to help with the pain. A few days went pass and it seemed like she wasn’t getting any better and she was saying she was having pain in other places. She stopped playing like she use to and that happy 3 year old started to disappear right before my eyes and then I knew something bad was going on and I had to figure out what it was and fast. So that Monday I started reaching out to her pediatrician and I wasn’t getting an answer and her health was still declining, she stopped eating and using the bathroom on her self. It even got to the point where I would have to get her dressed the night before because it hurt really bad when she tried to lift that right arm. I couldn’t keep seeing her in pain so Dad took her to the hospital and they ran a few test and they were thinking that she had ostomilities of the shoulder so they decided to keep her for two days will some IV antibiotics. That Saturday evening we got to go home she played for a little while and we to bed. When everybody woke up the next morning Miyonna stayed in the bed and didn’t move and she was really hot to the touch and she was very weak a few hours passed and she was still like that so I called the pediatrician and they told me to take her temp and it was 100.3 they told me to take her to hospital right away. Once we arrived her temp jumped up to 100.8 so they admitted us.

The next morning the doctors did their rounds and told me they don’t know what caused the fever but they were going to run some test to see what it could be. Everyday for the next four days it was a different test and all those came back negative so they informed me that they would do a biopsy of her right arm and if that was negative we could probably go home the next day. That Saturday morning on September 19th they were still waiting on the results, about noon one doctor returned to our room and told me they needed to speak to me about her results alone. I knew it wasn’t going to be good so as I’m walking with doctor all these thoughts were going threw my head as what it could be, once we get to the room 3 other doctors were already waiting on me and they told me to have a seat they wanted to go over her results. I called her dad because of Covid we couldn’t have any guests. While on the phone the doctor said her results came back and she has LEUKEMIA…………………… that word went in one year and out the other and before you knew it I busted out in tears all I was thinking was my baby, they didn’t know which one she had at that time. They didn’t know which one at that time but they let me know that the oncology team was on their way to talk to me. After we spoke they informed me that we’ll have to go to the oncology floor and we’ll have to stay in the hospital for almost a month to receive treatment and they let me know that she has ACUTE LYMPHOBLASTIC LEUKEMIA.

Once we got to our room our social worker came to our room with some very beautiful gifts for myself and Miyonna from the Dragonfly Foundation she left me with some information about the foundation and who to reach out to. I called and they told me all the wonderful things that the foundation provided for the families and they reminded me that we weren’t alone. The few months that followed Dragonfly really helped out a lot with lifting myself and my families sprit for the holiday since I quit my job to care for Miyonna and I wasn’t able to  give gifts to my children. They helped lift that load and so many other things. Any event that was going on in they city we were able to sign up for and attend. They also offered events for the parents for a special night on the town when we couldn’t afford it. Zak is very helpful and always there when needed. I’m forever thankful for the Dragonfly foundation and what they did for my family. We love Dragonfly and so happy to be apart of the family.