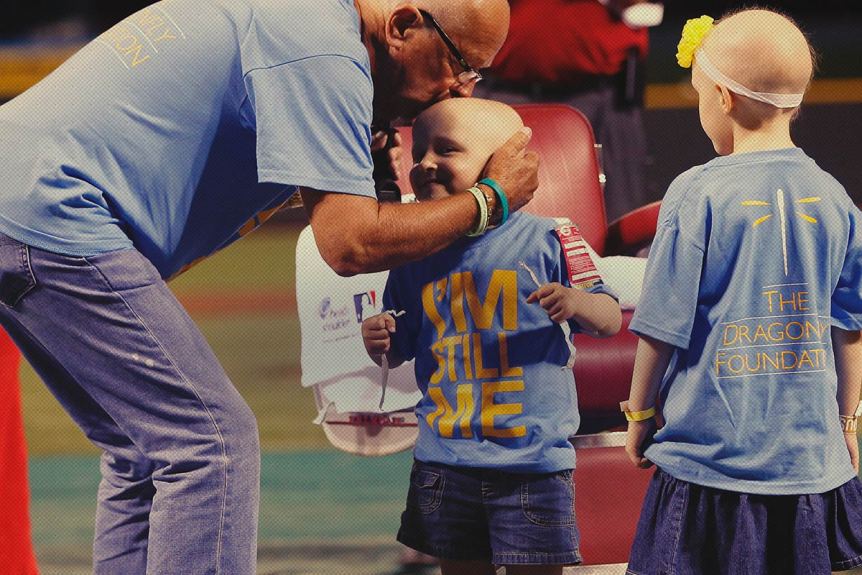 Marty Brennaman’s head was shaved because the Reds won. The Reds broadcaster had promised then-coach Chris Speier he’d shave it if the Reds’ winning streak back in July 2012 reached 10 games. It did and Brennaman did, right on the Great American Ball Park field after a Friday night game.

The winning streak is not what anyone remembers. What they remember is what happened next, when Brennaman pulled off his barber’s cape and Reds jersey to reveal a T-shirt with the words “I Am Still Me;” embraced three small cancer patients with similar, if smaller, shirts and bald heads; and introduced the crowd and a TV audience to a Mason nonprofit called the Dragonfly Foundation.

“If I can use a sports analogy, it was a grand slam. Or maybe a football underdog coming back to win in the last second,” said Ria Davidson, co-founder of the Dragonfly Foundation. “It meant so much. It was one of the most amazing moments of my life.”

Brennaman’s gesture brought Dragonfly some welcome buzz, and the foundation, which helps young cancer and bone-marrow transplant patients and their families, capitalized. Operating in a realm where the vast majority of nonprofits, best of intentions aside, don’t make it past a second year, Dragonfly just celebrated its fifth birthday.

Christine Neitzke and Davidson founded Dragonfly in 2010, after Neitzke’s youngest son, Matt, was diagnosed with Hodgkin’s lymphoma. The mission is “to bring comfort and joy to kids and young adults and their families who are enduring cancer treatments and bone-marrow transplants.” Dragonfly stages frequent fundraisers and works with hundreds of volunteers to support its 12 programs.

Working with Cincinnati Children’s Hospital Medical Center, Dragonfly helped more than 600 registered patients and 2,500 family members in 2014. (To help, you can visit dragonfly.org, or text TDF to 91999.)