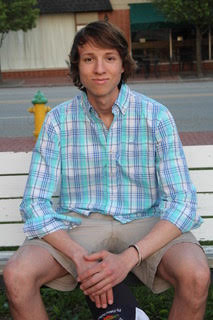 My life was just like any other 10-year-olds: full of hanging with friends, chasing girls around, and playing baseball. Every day was as good as the last and it seemed like joy was never-ending. This was the reality I knew until the one night came that would forever change my life.

It was a Friday in the brisk month of February and I was packing up my book bag at school. I remember saying goodbye to my friend on the way out because I expected to go to his house later that night. I walked outside to find my mom and dad waiting for me in our car. As I was getting excited to go home, I realized we had to make a stop at Cincinnati Children’s Hospital first for a test. I thought about the practicality of making this trip for the test, but then I remembered what put me into this position.

For the past few months, I experienced breathing difficulties while playing baseball and working out. I initially thought I had asthma or sports induced asthma, but tests from multiple doctors revealed that it was neither of these. After what felt like 10 doctors visits to multiple experts, we were referred to Cincinnati Children’s for an MRI. We showed up right on time and I immediately went into the testing room. A nurse inserted an IV and I slowly slid into a machine. I came out and hung with my parents until the results came in. Something felt wrong, though I could not place what it was. My family and I waited close to an hour before a doctor approached us. Time seemed to stop and nothing else seemed to matter once the words, “your son has cancer” were spoken. There were many unknowns at that point: What kind of cancer? What kind of treatment? Will my son live? Why?

At the age of 10, you’re not aware of much more than what concerns daily life. The same activities I enjoyed before would be unreachable for nearly a year. I immediately went into intensive chemotherapy treatment followed by radiation. After experiencing multiple life-threatening allergic reactions, kidney failure, and going into septic shock I knew somehow that life was going to get better than the hell I experienced daily.

Ultimately, it did. With the medical staff’s expertise and my family’s support, I was able to win the hardest battle I’ll ever fight. So much pain and vulnerability kept me away from one thing I enjoyed most next to family: playing baseball. It combined friends with the sport I had always had a passion for. A year of being immobile took a toll on my strength and athletic ability, so I had to work even harder to keep up with other kids my age. I was going to let cancer be apart of who I was, but not determine my future. Beginning workouts were especially difficult because regular exercises such as push-ups were impossible for me to do. I continued to work on my strength and after a few months, I was able to do sets of 10. I have continued to develop my strength and stayed consistent with my health in order to do many more over time. As cliché as it once sounded to be thankful for every day given, I learned that any day could very well be the last. With this mindset, I now apply myself further and strive for greatness because I know I am capable of it.