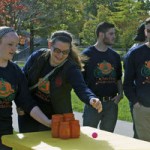 Members of Theta Phi Alpha walked across McMicken Commons with their heads down Sunday afternoon, bracing themselves against the possibility of being hit in the face with a pie.

Sunday marked the sorority’s second-annual Pumpkin Fest, a philanthropic event that allows Greek life to have fun for a good cause. Proceeds from the day, totaling more than $1,800, benefitted the Dragonfly Foundation. The foundation focuses on providing positive distractions to young cancer patients and their families.

Participants were asked to register for the event prior to attending. Students signed up in teams of four for a $70 fee, which gave participants access to all games and activities. The fee also bought Pumpkin Fest 2014 T-shirts for all team members, featuring a bright orange Cinderella-style pumpkin carriage printed on the front.

“Last year, we literally just came up with games, almost on the spot,” Morand said.

Games included bobbing for apples, pumpkin decorating and pumpkin pie-eating contests. Teams rotated activities on a schedule, giving them a hand at all activities. Participants also faced off in relay races that involved rolling pumpkins across the commons, becoming human wheelbarrows and chugging apple cider.

“It gets everybody in a competitive state,” said Sydney Allen, a third-year communications student and Theta Phi Alpha member.

Chi Omega member Taylor Bonifant, a second-year construction management student, heard about the event through a friend. She looked most forward to participating in the relay. In the meantime, she watched games from the sidelines and cheered on competitors.

A high point of anticipation was the option to pie Theta Phi Alpha members in the face. Pumpkin Fest T-shirts became decorated with pie, and whip cream dripped from students’ faces and hair.

Sorority members manned a pie table, handing out the silver tins for a $2 fee, with all proceeds to benefit Dragonfly.

Prizes were doled out at the end of the day, and winners were awarded with pumpkin-shaped trophies.

Although the event is continuing to grow, Morand regarded Sunday as a smashing success.