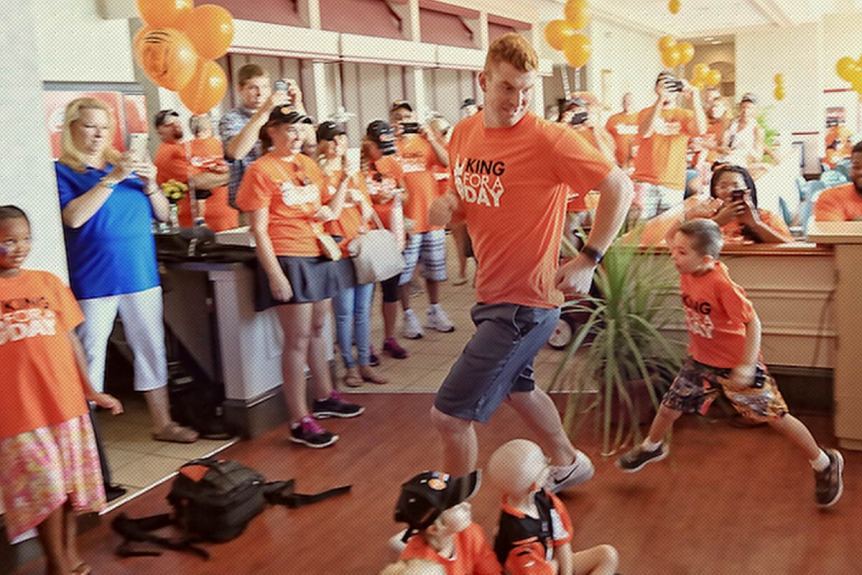 CINCINNATI — Twenty-one-month old Brianna Fleckinger had no idea who Andy Dalton was.

Neither did many of her peers who were running around a small space at Kings Island amusement park, playing a spirited game of duck, duck, goose one recent Sunday afternoon. None of them had any idea what Dalton’s postseason interception total was, nor did they know about his struggles during prime-time games.

At that particular moment, their focus was on the random big kid with bright red hair who had quietly tiptoed into their circle, waiting to be the goose who chased another kid around it.

“I can tell you every parent knew who he was and they had their cameras out and were pointing and laughing and smiling. Some of them had tears in their eyes. They will never forget that moment,” said Ria Davidson, co-founder of the Dragonfly Foundation, a Cincinnati-based group that specializes in providing children with pediatric cancers and their families opportunities to be distracted from the daily toll the diseases can take. With September being Pediatric Cancer Awareness Month, the group has an important couple of weeks ahead.

“A year from now, five years from now, they will say a Bengal — not just any Bengal, Andy Dalton — took the time to make them smile and really made them feel like a king for a day,” Davidson added.

The next day, Brianna, who suffers from Stage 3 neuroblastoma, underwent surgery to remove her tumor.

Few NFL players are as criticized as Dalton, a Pro Bowl quarterback who has led the franchise to an unparalleled four straight playoff berths to begin his career. Much like he told ESPN last month, Dalton said during his Wednesday news conference that while he hears the complaints about his play and lack of postseason success (0-4), he hardly lets it faze him.

That’s in part because he has a broader off-field mission that has him keeping proper perspective on life, football and what it truly means to be a winner.

Dalton first gained that perspective in 2009 when he was heading into his junior season at TCU. That spring, Presley Boydstun, the pre-teenaged granddaughter of Dalton’s first college quarterbacks coach, the late Dick Winder, had been diagnosed with acute lymphoblastic leukemia.

“I had gotten her number and I’d randomly send her a text saying, ‘Hey, I hope you’re doing well,'” Dalton said. “We’d have random conversations and [Winder would] always say, ‘You have no idea the impact that you’re having on her.'”

In time, Presley got better and went into remission. But Dalton’s experiences with her gave him and his wife inspiration for where they wanted their foundation to go when it started four years ago.

The Andy and Jordan Dalton Foundation’s mission has been to bring happiness to families with children who have special needs. Their outreach includes events like the 250-person “King for a Day” initiative at Kings Island and the “Date Night” program that allows parents of children with serious medical conditions to drop off their kids for a night of games and activities while the parents partake in an all-expenses-paid private dinner date. For the Daltons, the goal is to provide families like the Fleckingers with positive distractions.

“That (“King for a Day” event) felt like the vacation we were supposed to get,” said Brianna’s mother Kassandra Fleckinger. The family had to cancel a previously scheduled vacation after Brianna was diagnosed in April with the same pediatric cancer 5-year-old Leah Still, daughter of former Bengals defensive tackle Devon Still, overcame this past year.

“I know some people from Cincinnati are not huge fans of [Dalton] or anything, but I don’t even care,” said Fleckinger, a native of nearby Independence, Kentucky, and lifelong Bengals fan. “This guy, he’s got such a great heart. To be there with the kids, it’s a great organization that they have. When you’re going through a time like this, even just one day, it feels like you’re taking a week’s vacation. He’s totally humble and down to earth. You can tell they have a very caring family.”

The day they met the Daltons, Fleckinger, her husband Gregory and their healthy 5-year-old son Gavin had the heavy burden that had been atop their shoulders temporarily lifted. The parents weren’t thinking about bills that needed to be paid. The anxiety and fear that has been such a staple of their every day lives had faded. Gavin was content and Brianna had a chance to see something other than a hospital room.

Doctors have told the Fleckingers they believe Brianna is now in remission, but they are waiting for test results this week to reveal that.

Dalton said stories like the Fleckingers’, along with the June 2014 birth of his first child, Noah, have made him proud of his off-field project.

Still knows this all too well.

“It is something that you have to see first-hand [to believe],” Still said. “You can hear about pediatric cancer all the time, but you will never understand what it’s like unless you walk in those shoes or if you’re really close to somebody who does.”

Davidson credited the Daltons for helping highlight families with pediatric cancer sufferers for that very reason.

“People are pretty much shielded from pediatric cancer,” Davidson said. “Unless you live with these families day to day, you don’t see it. The fear of losing your job because you have to be away, or the worry that you have because you can’t be at your patient’s bedside because you don’t have enough gas money to get to and from the hospital every day. As a whole, the dialogue about a cure has been very strong. Everybody wants a cure and cancer awareness is probably at an all-time high.

“But pediatric cancer awareness still doesn’t get nearly the amount of support that it should.”

Dalton’s doing his part to change that.