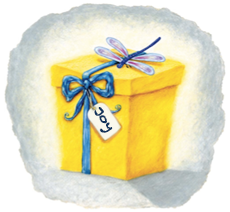 “It’s unreal because the neat thing is we love to see kids helping other kids,” Berlinger said. The Dragonfly Foundation provides assistance and support to families of kids going through cancer. “Until there’s a cure, we need to care for these families and these kids going through it.”

The kids going through it are called Dragonflies; it’s how they identify one another.

“The kids just want to be kids,” Berlinger said.

A student introduced Hall to Dragonfly while she was directing drama at St. Columban School in Loveland. That student was being treated for cancer and received support from the Dragonfly Foundation. Hall saw what they did for the family of that student and “fell in love” with the organization making it her charity of choice.

This school year Hall made “Love What’s Inside” the theme for the Loveland Middle School drama program. Her hope is the students will learn to love who they are as a person and then go out and show that love more fully to others. Their passion for drama forms a common bond, it becomes like family for them. They grow that flame, take it into the halls of the school and out into the community.

“They’re able to share this with others,” Hall said. “That’s where it starts; loving what’s on the inside.”

Hall proposed the idea to the kids at the beginning of the year. They accepted and chose to donate the proceeds from their three “Wonderful Life” performances to benefit the Dragonflies. The Christmastime donation will help Dragonfly provide care packages several new Dragonflies in 2017.

“It really pays it forward,” Berlinger said. “You see kids helping kids. You can see how much they appreciate it when you see the families come in and they smile and they hug you.”

More about Dragonfly Foundation at: www.dragonfly.org

More about Loveland Schools at: www.lovelandschools.org