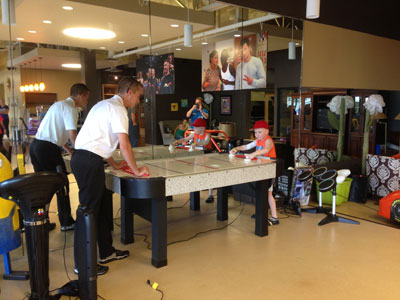 Professional stock car racing driver Ben Rhodes was greeted with a colorful sign, some Kentucky Speedway-themed cupcakes and a room full of smiles Tuesday afternoon when he arrived at the Dragonfly Foundation in Mason.

Rhodes is a second-year driver competing on the Xfinity Series, NASCAR’s second-tier national series. He’s already a winner at the age of 18, capturing five events en route to the 2014 K&N Pro Series East Championship as a development circuit rookie with Turner Scott Motorsports.

A 2015 graduate of Holy Cross High School in Louisville, he considers Kentucky Speedway in Sparta his home track. He’s racing there Sept. 26 at the VisitMyrtleBeach.com 300 in the No. 88 JR Motorsports Alpha Energy Solutions Chevrolet.

Rhodes, the 2014 Sunoco Rookie of the Year and voted the K&N Pro Series East’s most popular driver, is a NASCAR name to watch according to his team owner, Dale Earnhardt Jr., NASCAR’s most popular driver. But Rhodes had his hands full during an air hockey game against someone half his size at the Dragonfly headquarters.

After receiving a tour of the 6,000-square-foot fun place, and meeting Dragonfly co-founders Ria Davidson and Christine Neitzke, Rhodes and a partner played a two-on-one game of air hockey against little A.J. The energetic youngster is full of life, but he needs the distractions that the Dragonflies provide.

A.J. is a 7-year-old cancer patient who visits the nonprofit Dragonfly Foundation, a five-year-old center which brings comfort and joy to children, young adults and families enduring cancer and bone marrow transplants. There are ping-pong and foosball tables, video games and televisions galore. On the air hockey table, which is almost as tall as A.J., the youngster sent the miniature plastic puck whizzing past Rhodes and his partner for a goal.

“Yay,” he exclaimed, with a big smile.

“There you go,” Rhodes said.

That made everybody’s day.

For kids who go through the harrowing and life-changing, and sometimes life-saving treatments that result from being afflicted by a disease that kills millions of children each year, it is sometimes hard to smile. It’s no fun fighting cancer.

Dragonfly participants such as Rhodes and other previous high-profile visitors including country music recording artist Ryan Broshear and Livvy Stubenrauch, the voice for Princess Anna in Disney’s Frozen, help provide a distraction for some of those coping with the emotional, physical and financial toll of cancer and bone marrow transplants.

Nick Lachey, a singer, actor and television personality who went to high school in Cincinnati, and country music artist Keith Urban also have made connections with the foundation.

The Kentucky Speedway Children’s Charity gave $10,000 last year to the foundation, which serves over 3,000 cancer patients up to age 30 and provides over 23,000 inpatient encounters. With six employees, the Dragonfly Foundation organizes as many as a dozen events and two or three fundraisers a week.

“We provide a chance for patients and their families to do something different while going through a very difficult time,” Davidson said. “We want them to enjoy a moment, something they will remember the rest of their lives.”

For courageous kids like A.J., who want the chance to grow up, it’s fun being with people like Rhodes. The young driver grew up in a hurry, but never forgot something his parents told him. Rhodes started Kart racing when he was A.J.’s age

“My parents told me to always do the right thing. That goes for life and in racing,” said Rhodes, who lost an aunt and an uncle to cancer.

“It’s the morals and values I was raised with. My family always said that we need to help each other. I take those values with me everywhere. When I leave here, I’ll feel good. It’s hard to have a bad day when you know someone else is having a much harder day.”