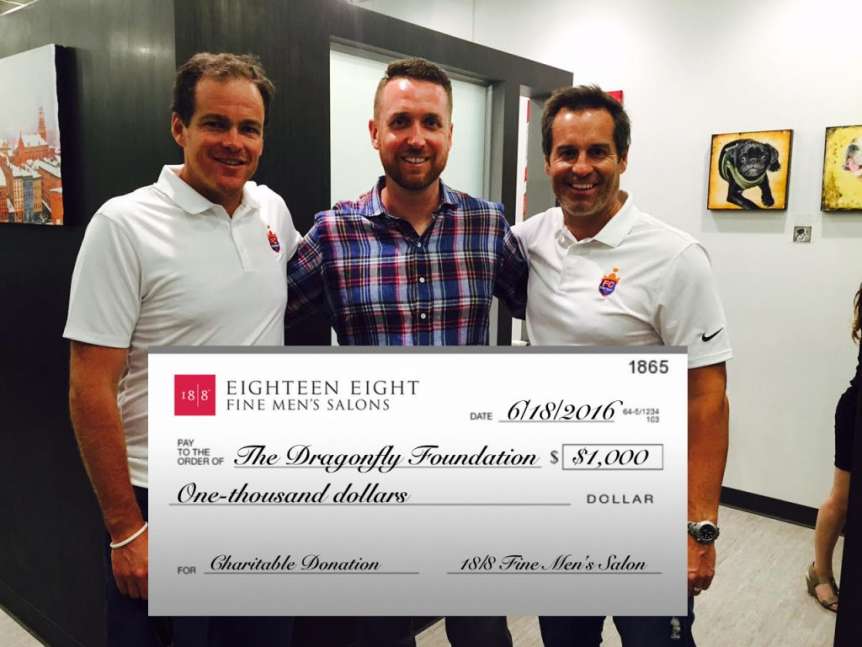 Cincy Chic, the only online lifestyle publication for women in Greater Cincinnati, partnered with Cincinnati Profile, FC Cincinnati and 18/8 Fine Men’s Salon in Oakley on June 16, 2016 to raise funds benefiting The Dragonfly Foundation. Through online ticket sales and day-of fundraising initiatives, a $1,000 donation was made to the Cincinnati-based charity.

Proceeds were raised through online ticket sales, raffle ticket sales, cash donations, along with a generous donation from the event host, 18/8 Fine Men’s Salon. “ The Dragonfly Foundation’s mission is critical and near and dear to my heart given I had major medical issues with my son when he was very young,” says Chris Brown, Owner of 18/8 Fine Men’s Salon. “I would love to find ways to partner with them in the future.”

“The money raised from this event will help us purchase in-room hospital meal cards so that parents don’t have leave their child’s bedside and walk four buildings over to grab a meal,” says Ria Davidson, Co-Founder of The Dragonfly Foundation. “Instead, they can stay with their child and have a meal in the room, which is especially important for newly diagnosed patients.”

Thirteen-year-old Maya Collins was the “Featured Dragonfly” at the event. Collins became affiliated with the Dragonfly Foundation when she underwent her bone marrow transplant in 2011. To learn more about her courageous story, visit http://www.mayagracecollins.com. Along with Collins, there were many “Dragonfly” children and their families in attendance.

“We are so grateful for the $1,000 donation, but are also appreciative of the support and awareness that was raised at this event,” says Davidson. “We can’t do what we do without help.”