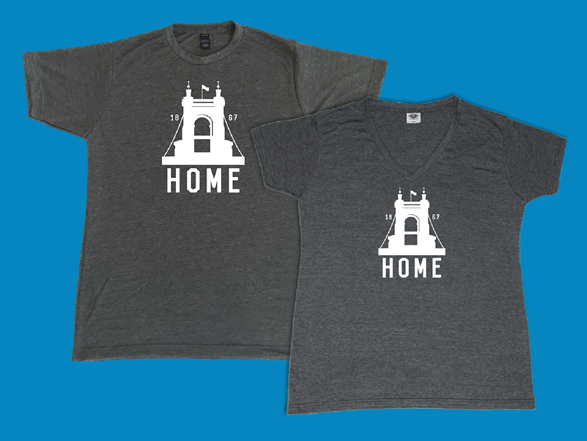 Cincinnati Bell Inc. is partnering with local entrepreneurs and businesses to celebrate Greater Cincinnati, and to help multiple organizations that are dedicated to improving lives across the region.

Cincinnati Bell’s new #CincyGive campaign officially launches this week with the “Home” T-shirt, the first in a series of four T-shirts the company will create. The “Home” T-shirt is designed by Cincinnati-based Rebel Pilgrim and produced by Covington-based My State Threads, and features an iconic image of the John A. Roebling Bridge. Cincinnati Bell will donate profits from T-shirt sales to four local organizations:

“Giving back to the community is part of Cincinnati Bell’s DNA,” said Christi Cornette, Senior Vice President of Marketing at Cincinnati Bell. “The #CincyGive campaign continues this tradition while adding a new element – the “Home” T-shirt – and engaging local community members to showcase their Greater Cincinnati pride while helping support great organizations in the process.”

Cincinnati Bell’s new advertising campaign begins on Feb. 5, when the company debuts two new commercials before, during, and after the Super Bowl. One of the commercials features more than 400 Cincinnati Bell employees and an original song recorded by local band Over-the-Rhine.

The other commercial features local entrepreneurs Molly Wellmann of Wellmanns Brands, and Josh Heuser of AGAR. Both commercials feature several landmarks throughout Greater Cincinnati, including the Roebling Bridge.

Cornette said the company wants to recognize what makes Greater Cincinnati special and why hometown matters in its new advertising campaign.

“We’ve been part of Greater Cincinnati for more than 140 years, and are passionate about serving consumers and businesses throughout the region,” Cornette said. “We will continue to innovate and promote our technology, but we thought now was the right time to put the focus on the people we employ, the customers we serve, and the places that mean so much to all of us.”