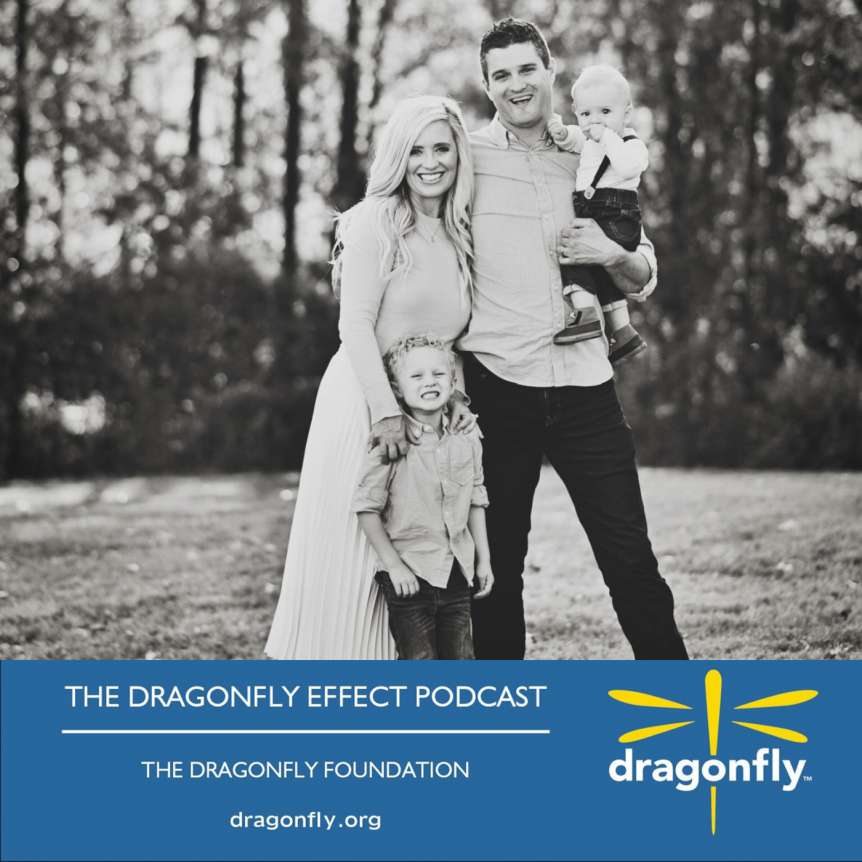 In this episode of The Dragonfly Effect, Christie shares her journey both before and after a miscarriage, a cancer battle, and the birth of her second son.

Getting to a cancer diagnosis after experiencing odd symptoms was a challenge for medical professionals. Christie’s symptoms, which changed her appearance, affected her health and appearance, made her lose her hair, and created a “buffalo hump,” led to the diagnosis of a more complicated form of Cushing’s disease, a condition that causes the pituitary gland releases too much adrenocorticotropic hormone (ACTH). Her body continually reacted as if she was always being chased by a lion,” producing too much stress hormone. Since most Cushing’s patients have a tumor in the pituitary more tests had to happen.

Two week’s later they found an atypical carcinoid tumor in her lung and lymph nodes.

The physical part of the disease and treatment was really hard for her. She also experienced hospitalizations, pain, spinal taps, and other tests and scans. She tried not to share her challenges widely, so people were later surprised to hear about her cancer journey. “You never know what people are going through,” she said.

Thankfully, she had a very supportive husband, family and friends available to help her deal with the physical symptoms, the emotional trauma and anxiety, child care, and traveling challenges she was experiencing. She also found strength in her faith.

To her, surgery was the easy part of her treatment; tapering off of medications was the worst. While she was weaning off of hormones and medications, she found out she was PREGNANT!

One year after her lung surgery, Christie’s youngest son, Jack, was born.

As a former teacher, she appreciates how The Dragonfly Foundation offers a program in schools that teaches kids about kindness, compassion and philanthropy with the goal of creating a more supportive community. She is very excited to be a part of Dragonfly’s Student Ambassador Program’s volunteer leadership team.

Dragonfly is grateful to iHeart Radio host, Scott Sloan, for recording the introduction/closing of the podcast. The executive producer of Dragonfly’s podcast is Joe Strecker.

The Dragonfly Foundation(R), a 501c3 nonprofit, helps pediatric cancer patients and their families find strength, courage, and joy. We do this by providing ongoing support, relevant materials, and caring, nurturing and transformative experiences.

To donate and to learn more about Dragonfly, please visit Dragonfly.org or text WINGS to 71777.

Please share this and other episodes of “The Dragonfly Effect” podcast.

Check out this week’s episode of The Dragonfly Effect Podcast!