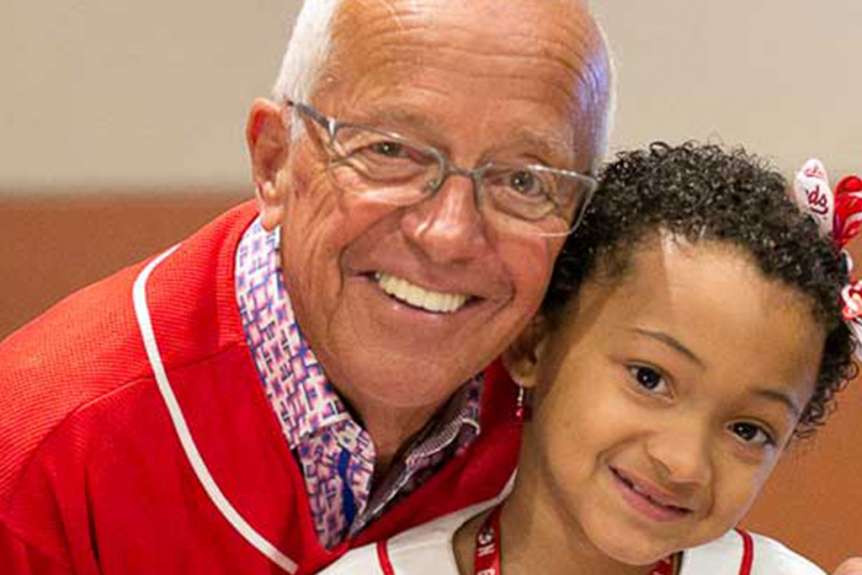 The Reds won their 10th in a row, and Brennaman, whose poofy white hair was one of his most defining physical characteristics, made good on his promise. In doing so, he formed an unexpected bond with a group of young kids who are quite literally in the fight of their lives.

The Dragonfly Foundation has been operating for five years, but thanks to Brennaman’s very public outreach to its members, this organization — which provides comfort to kids, young adults and their families enduring cancer and bone marrow transplants — is enjoying a little more of a public spotlight.

The relationship formed more by coincidence than careful planning. In 2012, Brennaman sat in a chair on the field at Great American Ball Park, ready to make good on his end of the bet, and, in front of thousands of fans, had his head shaved.

Brennaman then ripped open his button-down shirt to reveal a Dragonfly T-shirt underneath that said, “I’m still me,” an affirmation for the kids who have lost their hair because of chemotherapy and cancer treatments.

Brennaman had heard that one of the Dragonfly kids, after getting wind of his pending head-shaving caper, commented, “Friday night, Marty Brennaman will look like us.”

The Dragonflies were invited onto the field for Brennaman’s haircut, not knowing he was wearing the T-shirt. When he revealed it, there were few dry eyes, including Brennaman’s.

“The older you get, the more emotional you get about certain things,” Brennaman said. “When I was thrust together with those folks on a night in which I got my head shaved, I had no idea what the Dragonfly Foundation was. But I was on the field with three little girls that had cancer and I just embraced them. I kissed each one of them on top of the head and that began the whole thing.”

From there, a friendship, and a partnership, was born. The Reds have included the Dragonfly kids in many of their events, including hosting a party for them during the recent annual Redsfest in early December. Brennaman, along with several Reds players, spent significant time there, posing for pictures, engaging the guests and making sure everyone was having fun.

“He’s an angel,” Ria Davidson, co-founder of the Dragonfly Foundation, said of Brennaman. “The entire Reds organization, they’re all so wonderful to us. I can honestly say that when I need them, they’re there for me. When you have kids in crisis, that tends to happen. It’s nice when you have someone in the community that is so willing to understand and support small organizations like ours.”

One of the Dragonfly Foundation’s main goals is simply to provide an outlet for kids and families going through the trauma of dealing with cancer and the physical and emotional toll it takes on all involved. Creating a community environment is a key element of getting through the process from an emotional standpoint, and the simple act of being surrounded by others who are going through the same thing and understand how hard it is can make a huge difference.

The foundation’s very small staff — which has six full-time employees and relies heavily on volunteers — works diligently to connect families with other families, especially at events like the Redsfest party. They introduce kids to other kids and have formed an online community so families can continue to communicate even when they’re not able to gather in person.

While most of the work is done behind the scenes and out of the public spotlight, having a little star power thrown into the equation can’t hurt. Brennaman’s spontaneous friendship with the Dragonfly Foundation may have started by pure happenstance, but the benefits will likely be long-lasting.

“What the Dragonfly Foundation has done has given them an avenue here in Cincinnati to make them realize there are people that care about them, as individuals and a family as opposed to just a child that’s undergoing the treatment,” Brennaman said. “It gives them opportunities to do things that take them away from the hospital environment. It’s a constant battle for them, because they’re constantly raising funds to try and expand what they do.

“For me personally, I’ve never been as committed to anything in my life as I’ve been committed to what I can do to help them. It’s been unbelievable.”

Alyson Footer is a national correspondent for MLB.com. Follow her on Twitter @alysonfooter. This story was not subject to the approval of Major League Baseball or its clubs.