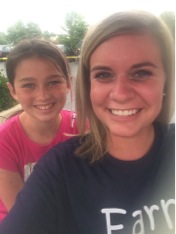 From our Intern, Marni Grow:

The Quaker Steak & Lube Restaurant in Milford is known for their legendary chicken wings, but their customers also know about their immense love for The Dragonfly Foundation. Saturday’s event was their second annual “Truck Touch” event benefiting Dragonfly. The restaurant’s general manager, Kathleen, has been strong supporter of The Dragonfly Foundation ever since her nephew’s three-year-old son became a Dragonfly. The little boy was diagnosed with cancer at the age of three. She has seen first-hand the impact the organization has had on this little boy and his entire family.

Today’s event had the restaurant’s parking lot set up like a children’s paradise; there was a bouncy house, face painting, food, a large variety of trucks to touch and sit inside. There also were many puppies available for adoption. Seeing all the children and parents having fun and smiling was a great sight to see.

While at the event as a representative of the Foundation, I had the privilege of talking to many people about the organization. More often than not, people had some connection to Dragonfly. They either knew someone, indirectly or directly, who was a Dragonfly Family, or they had heard about us from when Marty Brennaman shaved his head while wearing our t-shirt after a Reds game. Of all the of the kids and adults I met, one stands out most in my mind: a young girl 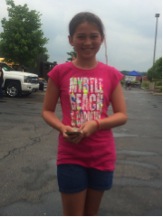 named Jordan. At just twelve-years-old, she not only expressed her knowledge of the Foundation, she also had been actively raising funds to help support its mission.

After talking with Jordan and her father for a while I was able to learn more about her and her connection to Dragonfly. Her father, a bartender at Quaker Steak & Lube, became familiar with the foundation from Kathleen, his boss. (He said that everyone who works there knows about Dragonfly because Kathleen loves spreading the word about the work we do!)  After learning about Dragonfly from her dad, Jordan took it into her own hands to support the cause. She and her friend began making bracelets and sold them to their friends and family. She then sold them door to door. Pretty soon everyone wanted to buy her handmade bracelets. Instead of keeping the proceeds, she gave it all to Dragonfly. Can you believe that?!

I was very impressed by Jordan’s maturity. She wanted no reward for what she was doing. She just truly loved, as we say, “being a Dragonfly.”

So here is to you, Jordan, you truly are an incredible girl! Thank you for helping our kids smile.