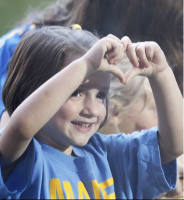 *** Today, The Dragonfly Foundation was featured in a story by the Sports Team of the Cincinnati/NKY Enquirer. See #8.

It really WAS one of the “coolest things!” Thank you, Enquirer – Cincinnati and Kentucky, for giving The Dragonfly Foundation the opportunity to introduce Cincinnati Bengal Devon Still to our Dragonfly families. The event meant so much to them. (Devon couldn’t have been nicer or more accommodating!)

The photo above (Credit: Cara Owsley, photojournalist) is one of our favorites from the Beyond The Stripes meet and greet/show taping. The story behind the photo is that the little Dragonfly (pictured), along her siblings and a couple other of our kids, had gone outside and were making this heart sign to Devon Still through a window directly behind where he was sitting…  To see more photos taken at the event, please CLICK HERE.

The link to the taping is including in the article below.

Two lucky Bengals fans will win Tuesday an autographed Devon Still jersey or a football autographed this year by more than 15 players and coaches.

The names will be drawn during the next episode of Beyond the Stripes, the live football talk show hosted by Enquirer Sports and recorded in front of an audience. Attending the show this season makes you eligible to enter.

The show begins at 7 p.m. at Moerlein Lager House. It is also streamed live on www.cincinnati.com and the mobile apps.

Cornerback Adam “Pacman” Jones will be the special guest.

He is one of 19 Bengals players and coaches to appear on Beyond the Stripes this season. They give behind-the-scenes analysis of the team, commentary on the NFL and a peek into their personal lives that you won’t see anywhere else.

Here are the 8 coolest things we saw the Bengals players do on the show this year:

See more highlights of the show at www.cincinnati.com/beyondthestripes.